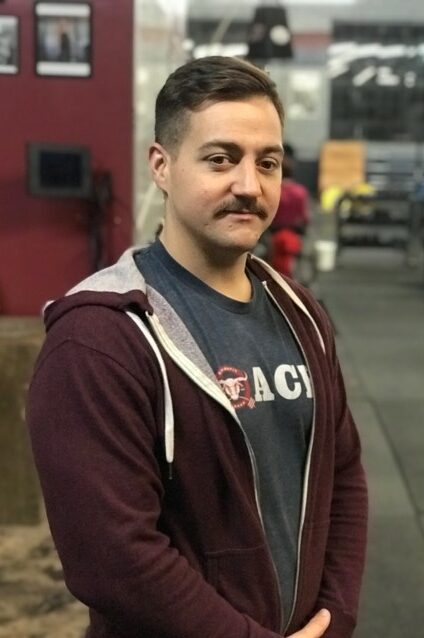 Stefan was born and raised in eastern North Carolina which becomes readily apparent during discussions of barbecue.  He and his siblings were very active during their youth and participated in many sports, including soccer, football, and basketball.  Though Stefan never excelled in any sport, he always enjoyed the camaraderie of being part of a team. During high school, Stefan was an offensive lineman and a shotput and discus thrower.  Stefan was also an avid sports medicine enthusiast and assisted with first aid and rehabilitation for all sports teams.

After high school, Stefan enlisted in the army as a mechanized infantryman.  During a deployment to Iraq in 2009, Stefan got his first glimpse of a CrossFit workout and immediately hated it.  Returning from his deployment, Stefan transferred to the Army Reserves and started training towards becoming a drill sergeant.  It was during his time as a drill sergeant candidate that Stefan developed a fondness for physical training instruction, group fitness and shouting in general.

Stefan began powerlifting in 2012 and was reintroduced to CrossFit in 2014.  The intensity and sense of accomplishment after every workout, combined with the community aspect, appealed to Stefan like no other exercise program.  Stefan joined Courage Fitness Durham in 2017 and fell in love with the community. Inspired by the coaching staff, Stefan decided to get his Level 1 certification and began coaching in 2018.  Stefan is currently pursuing a degree in exercise science with the intent to attend a graduate physical therapy program.