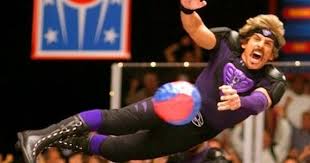 Join us today for Intramurals Event 16.6, the final event to determine our CF Open Intramurals Champions for 2016!

Round Robin Tournament today from 9am til noon.  All teams will play 6 games.  Best record earns points listed below.  Everyone is welcome to play.  Teams will be free to recruit players who didn’t participate until now.

We will play in Round Robin format. Each team will play 6 games starting at 9am. Points will be awarded by overall record on the day.

1. Maximum of 6 players per team. If your team is short of players on the day, other players may be recruited for that game.

2. 6 balls are placed on the centerline in two groups of 3. Each group of 3 is placed at opposite ends of the centerline, in front of the referees.

3. Opening Rush: Players must be touching the back line at the start of the game. After the starting countdown of “3, 2, 1 Dodgeball!” teams approach the centerline to retrieve the balls.

4. Teams can only take the 3 balls to their right initially.

5. Players attempt to eliminate opponents by hitting them with balls or catching their throws. If a player is hit with a live ball, that player is out.

6. Eliminated players line up against the designated wall or on the sideline, which is to be announced at the start of the games, next to the referees, according to the order of elimination.

7. Players are to play by the honour system. If in doubt, player should call themselves out.

8. Play continues until one team is eliminated.

10. Referee can pause the game at any point by saying, “Stop.” At that point, all events after and during are void.

11. Players are not allowed to make contact with any boundary or out of bounds area during game play; they will be called out.

12. All parts of a player’s person, including all parts of his body, clothing, or balls in possession are considered when determining if contact has been made.

13. Kamikaze plays: Players are not allowed to deliberately cross the centerline to make a play, they will automatically be called out.

15. A player is considered hit only if there is direct contact with a live ball released by the opposing team.

16. Hit etiquette: If a player is hit, he should drop all held balls, raise his arm to signal that he is out, and leave the court immediately and minimize gameplay disruption. (Once on the sidelines, knocked-out players are not allowed to kick or pass balls to their teammates. This is illegal and will result in the ball being turned over to the opposing team).

17. Headshots: To simplify the game, all headshots count. However, we do not condone intentional headshots. Gym Leads reserve the right to discipline players if there are repeated violations or if the single violation is severe (see Code of Conduct).

18. If in doubt, players should call themselves out.

19. If a player catches a ball thrown by an opponent, the thrower is out and one player returns to the catcher’s side in the order of first out, first in.

1. If there is only 1 player left from each team, suddent death goes into effect after 10 seconds:

– The centerline boundary is dissolved, while the sidelines remain active boundaries.
– Players begin with 2 balls in their hands at their respective walls.
The other 2 balls go at the ends of the centerline.
– When ready, showdown begins with a “3, 2, 1, showdown” from the referees.
– Tagging the opponent in a showdown will not count; balls must be released in order to hit someone out